In this study, a study on the performance of a polymer electrolyte membrane fuel cell system to which a variable pressure system is applied, a proposal for a waste heat recovery system to use the unused heat generated from the fuel cell, and a study on efficiency improvement were conducted. First, in order to accurately analyze the effect of the fuel cell according to the pressure, the effect of the pressure on the material movement through the polymer membrane was investigated. After dividing the movement of water through the polymer membrane into water vapor and water, the amount of passing was calculated by dividing the driving force by diffusion, convection, and capillary. When the humidity was high, the temperature was high, and the pressure was low, it was confirmed that a greater amount of water was passed over. Using this, an analytical study on the variable pressure fuel cell system was performed. In this system, the pressure is controlled by the speed of the blower and the angle of the back pressure valve, and the equivalence ratio and the stack inlet humidity are also affected by these relationships. The higher the pressure, the higher the performance of the system, but due to the decrease in inlet humidity and increased power consumption, the highest output can be achieved at about 1.6 bar. In the case of the organic refrigerant Rankine cycle for recovering the low-temperature waste heat of the fuel cell, R245fa was used as the refrigerant. The system was able to achieve an efficiency of up to 4% at 80 degrees, and the generated power at this time was about 270 W. In order to increase the efficiency at a given temperature, various types of expanders were studied. Finally, a study was conducted to increase the efficiency of the complex system by optimizing the operating conditions by constructing a complex system combining the fuel cell system and the organic refrigerant Rankine cycle. It was confirmed that, as the current density increased, the operating pressure of the fuel cell system decreased, and maintaining the pressure of the organic refrigerant Rankine cycle high was advantageous to improve the performance of the complex system. 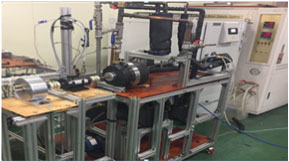 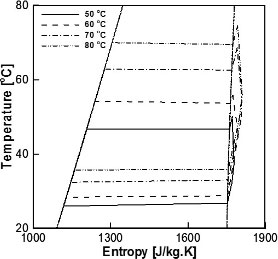 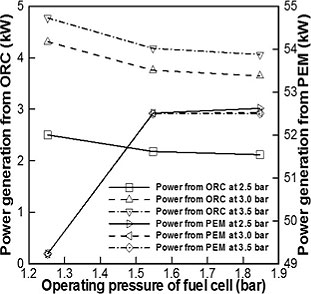 The double-effect absorption cycle is an evolution of the single-effect absorption cycle and consists of a regenerator, a condenser, an evaporator, and an absorber. Various types of refrigerant/absorbent pairs can be used as working fluids, and LiBr/H2O H2O/NH3 pairs are typically used as working fluids, and research is being conducted to further use ionic liquids as absorbents. For the selected working fluid, the performance change according to the temperature change of the regenerator, condenser, evaporator, and absorber is being conducted. In addition, the dual effect system can use low-grade heat as a heat source, and the performance change that occurs by changing the conditions of the heat source by applying the waste heat of the fuel cell as the heat source of the cycle is being studied. 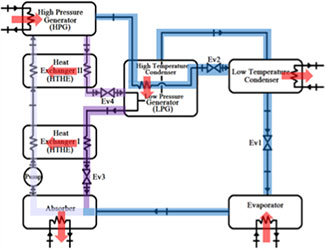 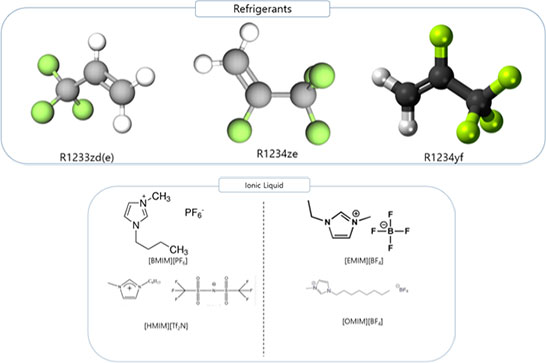